Have you ever seen a meal that looked SO good that you just have to know how to make it?

That’s felt when I saw my good friend Imani (aka @_AOImani aka @AOmarkerlove, go follow her if you don’t already!) made, get ready for it, short rib pasta. 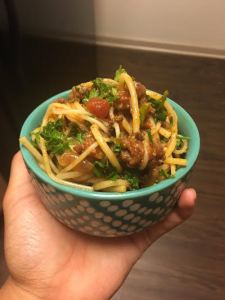 *drools all over my keyboard.*

Here’s how she made it:

Okay so quick story behind the mixture of noodles. i didn’t have enough angel hair so I added some spaghetti. Anyway…

In a small pot, I seasoned my short ribs with salt and pepper and seared them in a butter/olive oil combo until meat is all goldenly brown. After that I threw some red wine, the onion, 3 smashed cloves of garlic, crushed tomatoes, a dash of sugar and seasonings to accompany the meat. I allowed the food to cook for 2 hours and some change. 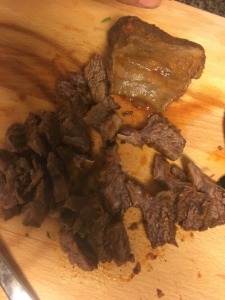 I took the meat out of the mixture and gave ’em a rough chop. During this time I had water boiling for the pasta. I added the spaghetti in first and then 4 minutes before the spaghetti was done I then added the angel hair. Aside from pasta being easy to cook, for whatever reason I was too eager to eat and didn’t blend the sauce together (eventually the crushed tomato mixture turned into a legit sauce). Therefore, in a pan I added the sauce, the meat and the noodles, together…Then I chopped up a shit ton of parsley and sprinkled it on top. 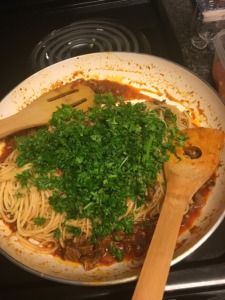 I must say, I was thoroughly impressed with everything. My short ribs were mad tender and the noodles were surprisingly cooked perfectly. The parsley brought freshness, and even though I wished to have parmesan cheese on deck, this dish was still very VERY delicious! 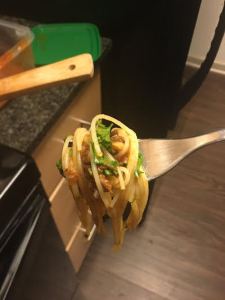 I can’t wait to try this one out myself.

Thank you so much Imani for sharing this recipe with SnaxNTheCity!